Fine Structure of the Hydrogen Spectrum

Here is a description of some finer details in the spectrum of hydrogen. It is based on an account of atomic energy levels that are noted by

. Let an atom of hydrogen

change from some initial state

, to some final state

, by emitting a photon

This is usually written as

This approach works very well, to perhaps a few parts in a billion. But experimental science marches on, and now observations of the

photons are being reported with a precision of two parts in

. We have to consider ever more subtle possibilities just to stay apace. So for EthnoPhysics, we extend analysis to considering what causes a hydrogen atom to change state, and what other effects may be impressed upon the atom in addition to emitting a photon. We account for the fine structure of hydrogen using a more detailed thermodynamic process that explicitly includes an interaction with some kind of field,

on the atom by changing its shape. Then for

Here is a repertoire of little kicks and torques used to get hydrogen to jump from state to state. These field quanta are generically noted by

. There are no electrochemical quarks in these fields. Energies are typically stated in micro electron-volts. The most important characteristic for classifying these fields is their helicity

are also relevant. The letter

notes a frequently used collection of quarks that is called the Lamb quantum.

Recall that the internal energy of quark

. Then a conjugate difference

and a conjugate mean

describe the relationship between quarks and anti-quarks

Usually we assume that the internal-energies of down-quarks are small enough to be completely negligible. Then we write

. But the conjugate mean for down quarks, as found from hydrogen observations, is small but not zero. Currently, our best estimate is

(µeV). Also, we generally make an assumption of conjugate symmetry so that

. But again, these assumptions are not good enough for hydrogen where the differences shown in the accompanying table provide a more accurate description of fine structure in the spectrum. The energy of

is also a function of its spin angular momentum number,

. The constant of proportionality is

(µeV), so the dependence is slight. But for field quanta, quarks and anti-quarks are paired, mass and charge are always absent, and small effects are noticeable. Let

note the quark coefficients of

. Then the internal energy is obtained from a sum of these small terms

EthnoPhysics understands the fine structure of the hydrogen spectrum by analyzing the thermodynamic processes that lead to the production of photons. For example, the

quartet of photons supposedly result from the four different interactions 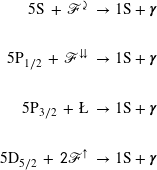 . This gross effect characterizes the multiplet, along with a transition mean of

, and a transition volume of

is the Bohr radius. Any spin-flips are described by

And a directed unit volume is specified as

then describe smaller variations in the resulting photon. Different sorts of transitions are associated with different forces. For example consider

, the double down force shown in the table above. It accounts for the following processes which are generically noted by

There are two transitions that occur without any precipitating force. They are

. These are the simplest processes, but in general, quark models of photons may be much more complicated. And interactions could possibly involve endlessly more complex loops and wiggles. So to make simple models, we impose a boundary condition: Out of all possible interactions, the only transitions that we actually attend to are described by a few specific values of

, the transition type where

notes the quantity of levo quarks in an atomic state. For hydrogen

takes on some integer values between -8 and +5. For example, consider the following transitions which are generically noted as

Mathematically, the entire class is identified by

. And here is another series, generically written as

and mathematically described by

All the foregoing interactions yield a photon and nothing else, no debris. They may also do some work,

, on the atom by changing its shape. We use

by assessing changes to the norm of the radius vector

pairs that are usually presumed to have perfect conjugate symmetry. For this ideal case

. But in the finely-balanced mechanical system of a hydrogen atom, we notice a small change described by

. The distances given by

characterize each transition-type. They are tiny, effects are measured in micro electronvolts as shown in the adjoining table. The change of shape is combined with the change of internal-energy caused by absorbing

to define the transition energy density as

was introduced earlier. Then the work done by

that cause hydrogen to jump from state to state are specified in the table above. Then since quarks are conserved we can make photon models just by adding and subtracting quark coefficients as prescribed by the following processes which are generically written as

Measurements of photons report on their wavelength, which is related to their energy by

. Wavelengths may also depend on a photon’s surroundings. Then the symbol

is used to indicate a wavelength where environmental effects are negligible. We assume this to write

are obtained from the description of atomic hydrogen. And, as shown above, shape changes are described by

. For more detail about these calculations, please see the spreadsheets in the files stored here.

Wavelengths of Other Multiplets

transition has been assigned by Kramida et al. And all adjustable parameters have been tested to represent that datum. But still, the observation does not completely agree with the theory presented above. However, it surprisingly fits perfectly with calculations for the

transition, even within an experimental uncertainty that is 4 or 5 times tighter. For additional detail about these calculations, please see the Atoms and Photons spreadsheet.