where each repeated cycle is a bundle of quarks

and each quark is described by its phase

. Use this phase to sort quarks into a pair of sets,

so that all quarks of the same phase are in the same set. Then

are called phase components of P, and they are out of phase with each other. We write

Some sub-set of the quarks in

may be matched with quarks of the same type in

. These quarks have phase symmetry with each other, so we use

to symbolize these sub-sets. A different sub-set of quarks might be matched with anti-quarks of the same type. These quarks have phase anti-symmetry with each other, so we note them as

and vice versa. But such lopsided possibilities seem to be superfluous so we do not consider them further. Thus P is represented by the union of two entirely symmetric, and two purely anti-symmetric components. Quarks in the symmetric sets may vary independently of the quarks in the anti-symmetric sets. This is expressed mathematically as

This arrangement provides a general way of describing particles that are moved or excited by the absorption of additional quarks. P is defined as an excited particle, or said to be in an excited-state, if it contains at least one anti-symmetric pair of quarks

These anti-symmetric quark-pairs may be due to the absorption of a photon. Or more generally, to interactions with any field quanta.

We say that P is in its ground state if it has perfect phase symmetry. Then P has no anti-symmetric quark-pairs

This definition constrains particle-models so that quark-coefficients must all be integer multiples of two when in the ground-state. It is why many nuclear particle models show patterns like 2-4-6 instead of 1-2-3. We can also evaluate the wavevector for a free particle, which is given by the sum 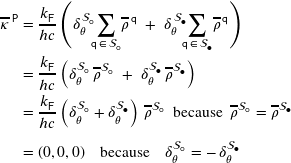 Whenever P interacts by absorbing or emitting a photon, its degree or level of excitation changes too because photons contain anti-symmetric quark-pairs. This relationship is quantified by defining the principal quantum number as

is the number of ordinary down quarks in P. Note that the italic letter

is employed for quark coefficients, whereas the upright font

is reserved for the new quantum number. We use

to describe the level of excitation, and so down-quarks retain an important role despite having almost no internal energy. Remember that

so the principal quantum number is never negative. And recall that quarks are conserved, so when P changes from some initial state

, to some final state

, by emitting a photon 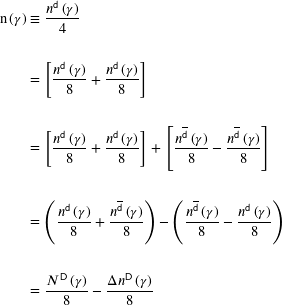 And the conservation of down-quarks implies that

Comparing the last two expressions for

shows that the conservation law is always satisfied if

Next we take a closer look at the fields and photons that cause particle excitations.