described by an out of phase pair of components

that are almost perfectly anti-symmetric so that

for all quarks except down quarks. Many photon attributes are nil because phase anti-symmetry implies that almost every quark is matched with a corresponding anti-quark somewhere in the photon. So for most types of quark Z, the net number of quarks is zero

As for the down-quarks,

is not zero. But recall that by convention, the internal energy of down-quarks is so small that it is usually taken to be zero. Then any imbalance between ordinary down quarks and down anti-quarks can be ignored. Substituting these conditions into the definitions for charge, strangeness, lepton number, baryon number and enthalpy gives

Recall that the lepton-number, baryon-number and charge are conserved, so a particle may freely absorb or emit countless photons without altering its own values for these quantum numbers. No work

is required to assemble a photon because the two phase components

have radius vectors with the same norm, but in opposing directions

too. But not all photon characteristics are null; the outer radius

and the inner radius

may be greater than zero. Also consider the wavevector

which is found from the sum 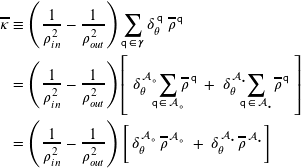 are out of phase, so

. And radius vectors are symmetrically opposed, so

. These two negative factors cancel each other such that

. Then we can express the wavevector as

The wavenumber is given by the norm of the wavevector, so

We can drop the subscript on

because both phase-components have the same norm. And recall that

is the work required to build one of these phase-components. So in energetic terms, the photon’s wavenumber can be written as

Then the wavelength of a photon is

Finally recall that by definition the inner radius

is constrained such that for all photons

is a free particle where

is as small as possible, the wavelength will be

Photons are classified by wavelength as noted in accompanying table. A more general treatment considers that a photon’s wavelength may also depend on its surroundings. Then the symbol

is used to indicate a wavelength where any such environmental effects are negligible. And next we mix photons with other substances to consider excited particles.