The union of a photon

is noted by the symbol

and called a graviton

note the number of up seeds and down seeds in a particle. And recall that seeds are conserved. So the foregoing definition of a graviton implies that

Swapping quarks with anti-quarks does not change thermodynamic seed counts, so

. Then the seed coefficients of the graviton are given by

Using these values, the angular momentum quantum number of a graviton is found as 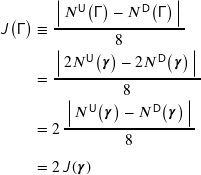 But by definition the angular momentum quantum number of any photon is one. So for all gravitons

Gravitons are defined by the union of a photon with its matching anti-photon. So the net number of any sort of quark in a graviton is zero. This specifically includes down quarks. Photons have mismatched quantities of down-quarks and down anti-quarks. But for gravitons, these imbalances cancel each other perfectly so that

for all types of quarks. Substituting these conditions into the definitions for charge, strangeness, lepton number, baryon number and enthalpy gives

Then recall that the lepton-number, baryon-number and charge are conserved, so any particle may freely absorb or emit countless gravitons without altering its own values for these quantum numbers.

The Location of a Graviton

When some particle P absorbs a graviton, we say that the graviton is located at P’s center of gravity. To be more exact, let us assess the radius vector for a graviton. Recall that

is defined from sums of quark coefficients, and quarks are conserved. So

But as discussed earlier, any particle and its anti-particle have symmetrically opposed radius vectors, so

for all types of quarks, including down-quarks, the inner radius of any graviton is nil

An inner radius of zero means the graviton can be in P’s core. So overall, the center-of-gravity, the center-of-P and the core-of-P are all understood to be in the same location.

is required to assemble the quarks in a graviton

So gravitons have no mass, they are ethereal. And as for their motion, recall that the wavevector

Then, in a frame of reference noted by F, the momentum of a graviton is given by

is the total number of quarks in

, including all types. This expression shows that all of the gravitons in a description have their momenta pointed in the same direction, and this direction is determined by the character of the reference frame. Overall, gravitons are certainly “not like rain”1J.N. Patterson Hume, On Beyond Darwin, page166, 1983.. They have no mass, there is no ‘drag’. And their momenta are uniform. So gravity, the force they carry, is uniformly directed too. The foregoing results can be substituted into the definition of mechanical energy to obtain

So in a perfectly inertial reference frame where

gravitons carry no energy or momentum. If we assume that a frame is perfectly inertial, then we are also presuming that gravity can be ignored. For non-inertial frames, both the momentum and energy of a graviton are directly proportional to the total number of quarks it contains.

For additional detail about these calculations, please see the Field Quanta spreadsheet. There is a lot more to be said about gravitons and gravity, but next we shift to a discussion of nuclear particles.

Let us describe [[[aggregates |particle]]] P within a [[span style=” display:inline-block ; “]][[[frames |frame of reference]]][[/span]] F, and recall that for WikiMechanics reference frames are modeled by some enormous set of [[[quarks |quarks]]]. Consider some subset of these quarks located in the vicinity of P and generally call them the quarks [[[dispersion |surrounding]]] P. We use [[

]] to represent this local environment, and employ the symbol [[

]] to note all of the other remaining quarks in F. Then the frame of reference is given by the union

We usually assume that the surroundings are just a small part of the frame. Then [[

]] will contain almost the same quarks as F, and [[

]] will have almost the same characteristics as F. Let all these sets of quarks be described by [[

We almost always assume that a frame of reference is [[[inertial |inertial]]]. Then since [[

]] is called the gravitational component of the frame of reference. And we say that gravitational effects are perfectly negligible if